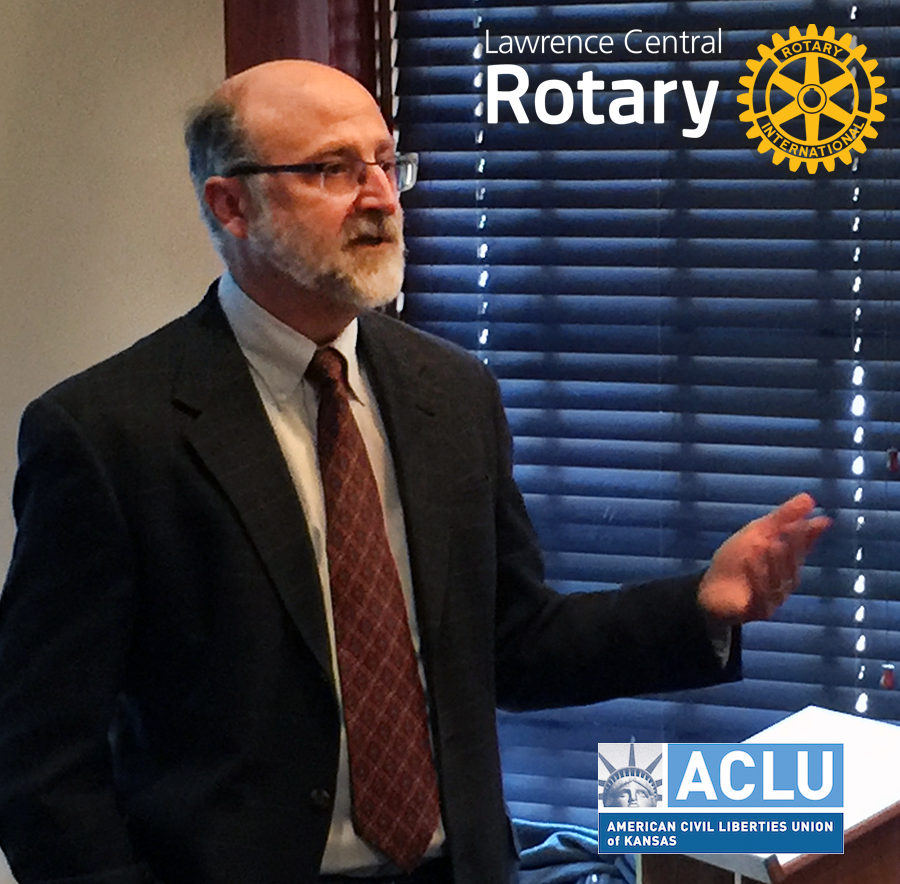 Doug Bonney, Chief Council and Legislative Director of The American Civil Liberties Union (ACLU) of Kansas, spoke on the organization’s history, mission and current activities.  The ACLU was founded in the early 1920’s in reaction to government repression of war dissenters who were often harassed and imprisoned.  Through legal action, lobbying and education the ACLU set out to define the meaning of the Bill of Rights and the Constitution as it applied to all people.  The ACLU has a history of taking on unpopular and precedent setting cases including the Scopes Monkey Trial, mandatory school prayer, the Skokie, Illinois Nazi march, and Roe vs. Wade.

The ACLU of Kansas is a local nonprofit, nonpartisan chapter with the goal of defending the rights and civil liberties of persons regardless of race, creed, color, gender or class.  The organization has two full time and two part time staff and a 13 member board.  The ACLU often advocates for the most marginalized members of society for voter rights, criminal justice reform, free speech, privacy, reproductive freedom, LGBT equality, women’s rights, racial justice, immigrant rights and religious freedom.   The Kansas chapter has recently achieved some notable victories in court.  Doug Bonney argued successfully for marriage equality, describing it as the “civil rights issue of our time.”  Another victory was scored when the court struck down the “two tiered” portion of the Kansas voter registration law that was ruled to be an unlawful requirement.  The speaker indicated that the current state legislative session would be particularly challenging for supporters of civil liberties.  Learn more about the ACLU of Kansas and their program for 2016 by visiting ACLUKansas.org.