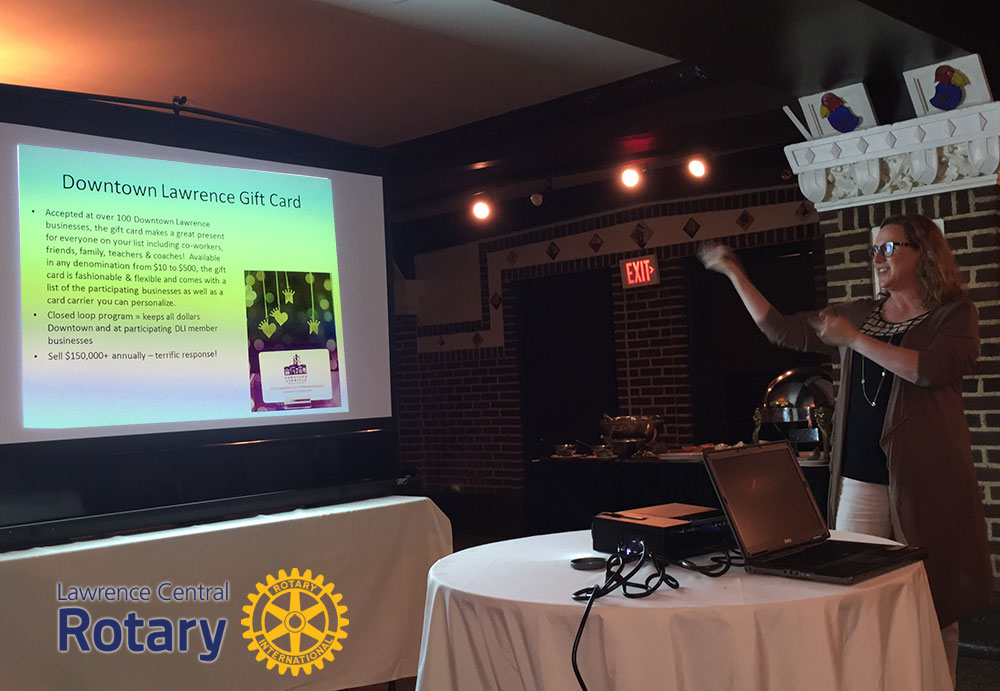 Sally Zogry’s motto is “Shop Small, Shop Local.” Zogry, the director of  Downtown Lawrence, has been on the job for three years. She’s watched activity in downtown Lawrence grow and is working to keep the downtown vital and busy.

“I plan an event that I’d like to attend—sometimes bringing the kids,” she said.

New activities in downtown have included the gift card program, collaborative partnerships with downtown businesses  which has been very successful. Discount gift cards ranging from $10 to $500 are accepted at 100 downtown businesses. “Annually we’ve sold $150,000 worth,” she said. “It keeps money downtown and is a closed loop program with only participating businesses. “

The Winter Parade, the first weekend in December has always been a popular event, but parade goers didn’t stay downtown after the parade, so it has been repackaged into a “Winter Weekend” with caroling, holiday shows and shopping and dinner packages.

Final Fridays have been rejuvenated with a goal toward including more businesses and encouraging more coordinated public relations and marketing by those participating, with an emphasis on restaurants.

The popular  Farmers Market, now in its 40th year, in the 800 block of New Hampshire on Saturdays, will be moving a Tuesday market to the Lawrence Library Lawn Plaza to facilitate parking.

Events scheduled for 2016 include  the Busker Fest in late May, the Dinners and Movies on the Library Lawn each month in the summer, and the fourth of July fireworks.

Zogry talked about six new businesses starting in town ,four restaurants, a boutique and a furniture store, and said she  is looking forward to a lofts and apartments building on New Hampshire and, possibly, a downtown grocery store.