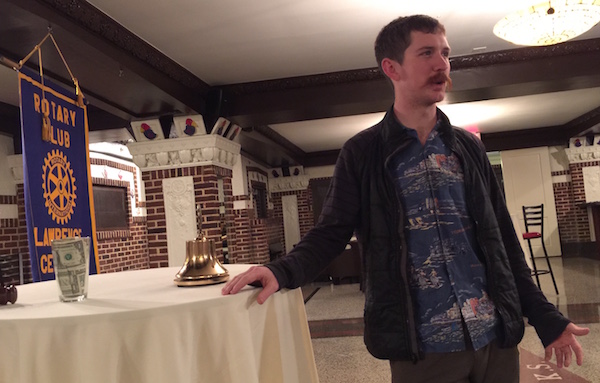 The old record time for the more-than-400-mile trip across Kansas on a bicycle was 29 hours and 52 minutes, set by Tim Parks of McPherson in July 1993.

Ashton Lambie’s wanted to complete the same journey in 24 hours or less.  “Technology has come a long way since the early 90’s and I was confident with newer bikes and aerodynamics I could do it, ” Lambie told Lawrence Central Rotary.

If you’ve attended any of Lawrence Central’s Community Bike Ride’s you’ve probably seen Ashton in the Sunflower bike tent tuning-up or fixing bikes that attendees bring to the event.

Ashton is also an avid distance rider who’s ridden in events all across the area and beyond.

The ride was sanctioned by the Ultra-Marathon Cycling Association after a barrage of paperwork was completed and he was able to coax and get a friend and co-worker approved as a race-officia and Lambie’s crew — made up of his wife and parents — drove behind him for the entire route.

Lambie rolled over the Kansas-Missouri border 23 hours and 53 minutes later, breaking the old record by nearly six hours and beating his personal goal by several minutes.

For more information about Ashton’s ride there’s a great article in the Lawrence Journal World you can read.

The membership of Lawrence Central has chosen to meet virtually during the COVID-19 public health crisis. When it is deemed safe to meet in person again we plan to but for now our meetings have gone virtual!

Join us Wednesdays for a virtual lunch meeting from Noon to 1pm at our recurring Zoom Meeting room.

To call in via voice