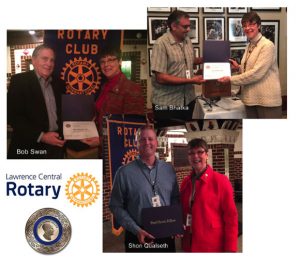 Lawrence Central Rotary has named Bob Swan, Shon Qualseth as Paul Harris Fellows in recognition of their service as president in prior years.  Bob joined LCR in February 2009.  His year as president was 2012-2013.  Shon joined the club in December 2007 and served as president from 2011-2012.

Lawrence Central Rotary has also named Sam Bhakta a Paul Harris Fellow in recognition of his four years as Treasurer of the club.  Sam joined LCR in November 2009.  Up until last summer, Sam was owner and manager of the Econolodge in Lawrence.  Since selling that business, Sam has been exploring new business ventures in the region.

Warm congratulations and a hearty thank you to each!