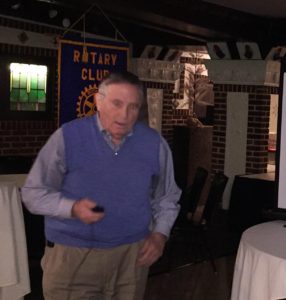 Bob Swan reminisced about his time in South America as a Rotary Foundation Fellow in 1966 when he spoke to Lawrence Central Rotarians in December.

During his 10 months in Argentina, he conducted research on the Peronista movement, culminating in interviews with associates of Juan Peron’s second wife, Isabelita, and a five-page letter from Peron himself answering Swan’s questions.

He traveled widely while he was in Latin America, being hosted by Rotarians and, at one point was joined by his parents from Topeka. In both Buenos Aires and Cordoba he presented programs on American folk music. He also interviewed three other Argentinian former presidents, Gen. Pedro Aramburu, Dr. Arthur Frondizi and Arturo Illia.

He said that what impressed him most during his fellowship were the remarkable world natural and cultural sites of the southern hemisphere and a strong lasting impression of the prestige and position of Rotary and its highly successful members in South America.

One of 50 fellows chosen world wide that year he said “thinking back 50 years now on all the experiences of 1966 and early 1967 I feel very positive about the 11 months I spent representing Rotary International and the United States in Latin America.”