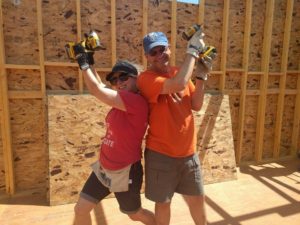 Lawrence Central Rotarian Margaret Weisbrod Morris found that her experience as an arts educator in low-income urban settings helped her appreciate of the quality work done by Simply Smiles in the plains community of Le Plant on the Cheyenne River Sioux Tribe Reservation in west-central South Dakota.

In June, Weisbrod Morris accompanied her daughter Ruby and other high school students and adults from Plymouth Church, Lawrence, when they joined the staff and interns at Simply Smiles in welcoming about 30 children from the Cheyenne River Sioux Tribe to a week-long summer camp.  The project, the only such effort sanctioned by tribal leaders there, aims to alleviate the high suicide rate among young people.

Not only did volunteers help conduct the camp, they spent half the day doing construction work.  During those mornings, Margaret learned how to wield a power drill as the group raised roof trusses on a new bunkhouse.  Others painted and renovated existing homes in the community and dug a trench to connect electricity. After the work, the volunteers had time to have fun with the children, playing basketball, creating huge bubbles, and swimming in the Missouri River–their one bath during the week.

The experience was the epitome of the Simply Smiles approach: ask what is needed, listen to the answer with empathy, devise ways to solve the problems together, and during the process, develop lasting individual relationships. The formula has made Simply Smiles impactful, sustainable, scalable, holistic, and successful.

Simply Smiles is a not-for-profit organization that provides bright futures for impoverished children, their families, and their communities. Founded in 2007 by Bryan Nurnberger, its first projects were in Oaxac, Mexico. The Simply Smiles’ partnership with Rotary was recognized with a Paul Harris Rotary Award from a club in Naugatuck, CT in 2012.