What’s Up at Watkins Museum of History? 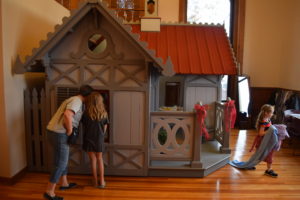 In addition to the core exhibits about Douglas County history on display at Watkins Museum, such as this 1870s playhouse, there is always something new to see, according to Steve Nowak, Executive Director.

Sometimes the “new” is an addition to an existing exhibit. For example, the story of Lawrence’s efforts to establish a Fair Housing Ordinance in the 1960’s has been added to the “Enduring Struggles—Lawrence Fights for Change.” Documents, music, photographs, artifacts, and oral histories combine in an interactive display highlighting Lawrence’s spirit of activism and community spirit in various decades.

Changing exhibits can focus attention on a particular aspect of local history. For example, “Community and Culture: the Lawrence Turnverein” tells the story of the Germans who were among the earliest settlers in Lawrence.

“Hidden Treasures: Staff Favorites from the Watkins Collection” showcases artifacts in new ways.  Find a cowboy hat signed by John Wayne and a sculpture made of the soles of shoes, as well as other treasures.

“Mass St. Magic—Weaver’s Window Displays” celebrates the 160th anniversary of the local department store by recreating some of the window displays it featured over the years. Founded in 1857, Weaver’s is one of the longest running department stores in the United States. Even in 1850’s, it was known to bring NYC fashion to Lawrence.

On Saturday, December 2, the museum will host “Tails and Traditions Holiday Festival.” Stop by between 9 a.m. and 2:00 p.m. for prime horse parade-viewing spots, snacks, kids’ crafts and games, and live holiday music. The Watkins Museum of History hosted 17,500 visitors in 2017, up from 6,000 seven years ago when Nowak began his tenure.