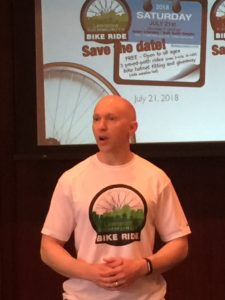 The annual Community Bike Ride has become not only a celebrated event in Lawrence, but also an anticipated tradition in Steve Lane’s family.

“On March 21st my son, who is eight years old, came to me so excited,” said Lane. “‘Dad, it’s only four months to the Community Bike Ride!'” Now entering its eight year, the bike ride has been part of his entire life.

The idea for the Community Bike Ride was born in 2009.  Lawrence Central Rotary club members met with Marilyn Hall, of Douglas County Community Foundation. The club was looking to discern:

Hall shared that the Foundation had identified that while there was a strong local biking community, it was not accessible to families. Recreational opportunities were geared toward high-end riders.

With support from the Foundation, the Club built RideLawrence.com and had enough funds to manage two years of the ride.

While the activities at the ride and sponsorships and partnerships have increased, the purpose of the ride has remained the same, to promote biking as a fun and healthy activity for families.