Grover Barn and the Underground Railroad 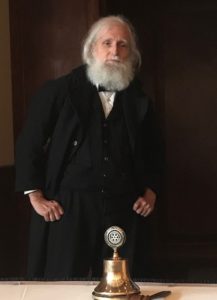 John Brown as portrayed by Kerry Altenbernd told the story.

When Jim Daniels, a slave in Missouri, found that his owner had died, he feared that he and his family would be sold and separated.  Daniels contacted John Brown for help.  Brown brought Daniels and his family out of Missouri to the Grover farm near Lawrence.  The “cargo” of 12 people stayed several nights in the Grover’s new stone barn, then began a journey on the Underground Railway that would take them north and east through Nebraska, Iowa, Illinois, and Michigan, en route to freedom in Canada.  The Grovers defied federal law by harboring the fugitives, risking fines and imprisonment.

Judy Sweets, local historian and archivist, has dedicated her energy to researching the Underground Railroad in Douglas County.  She explained that there are originally thirty sites on the Railroad in the area.  Two remain in Lawrence:  the Grover Barn at Stone Barn Terrace and Lawrence Avenue and the Miller Farm at Haskell and 19th Street.

The stone barn was built in 1858 by Joel Grover and his wife Emily on their 180-acre farm located about a mile-and-a-half south and west of the center of Lawrence at the time.  When the Grover family finally left the farm in 1953, the barn was used as a sculpture studio for many years.  In 1981, the Grover Barn was refurbished by the City of Lawrence to serve as Fire Station #4. 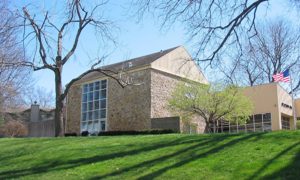 Recently, the Guardians of Grover Barn announced that the barn has been designated as a documented Underground Railroad site on the Network to Freedom by the National Park Service.