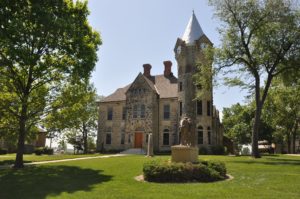 Dr. Robert Smith, Director of the Fort Riley Museums, declared that it has been adaptation that has kept Fort Riley open over the decades, evolving repeatedly to meet the army’s needs.

Established as a frontier post in 1853, at the time Fort Riley was situated at the “end of civilization.”  As the boundary of the frontier changed, however, the fort had to adapt its role to remain open.  By the late 1800s, it became a “school post” for the cavalry and light artillery and served as a haying station for the entire army.

When World War I began, Fort Riley was the largest U.S. training site for troops headed to Europe, and it continued to be a training site during World War II.  During that era, it became the Divisional Post for the First Infantry.

The First Infantry Division, known as “The Big Red One,” is the oldest continuously serving division in United States history, sending troops to France in World War I and to North Africa, to Sicily, and to England in World War II.  First Infantry troops participated in D-Day at Omaha Beach, were stationed in Germany during the Cold War, and went to Vietnam.  They were present for Operation Desert Storm in 1991, Operation Iraqi Freedom, and Operation Enduring Freedom in Afghanistan.