The 2019 Community Bike Ride is set for July 20th.  We’ll again be at Lawrence’s Rotary Arboretum at 27th and Waukarusa.

This year we have 4 rides planned for folks of all ages and experience.

We are excited to again to be sponsoring free helmets, safety vest, and other exciting goodies (while supplies last).

After a trial run last year, we will again be partnering with Lawrence’s bike share company VeoRide who will offer FREE bikes for use during the event if it is too difficult for you to get a bike to the Arboretum. You just need to register before 7/18 at http://bit.ly/cbr-bike-res

All of this is made possible by volunteers from Lawrence Central Rotary and some fine local sponsors who love supporting getting outdoors and being active.

You are also welcome to join the ride after-party at S&S Artisan Pub and Coffee House at 2228 Iowa Street between 12 and 2pm.

We will have releases on-site for attendees to sign when checking in, but you can also download one here to fill out and bring if you like.

We’ve had some requests for maps so we’ve put this together for you. If you’d like to download a pdf of one use this link.

Thanks For Coming Out To The Fall Community Bike Ride! 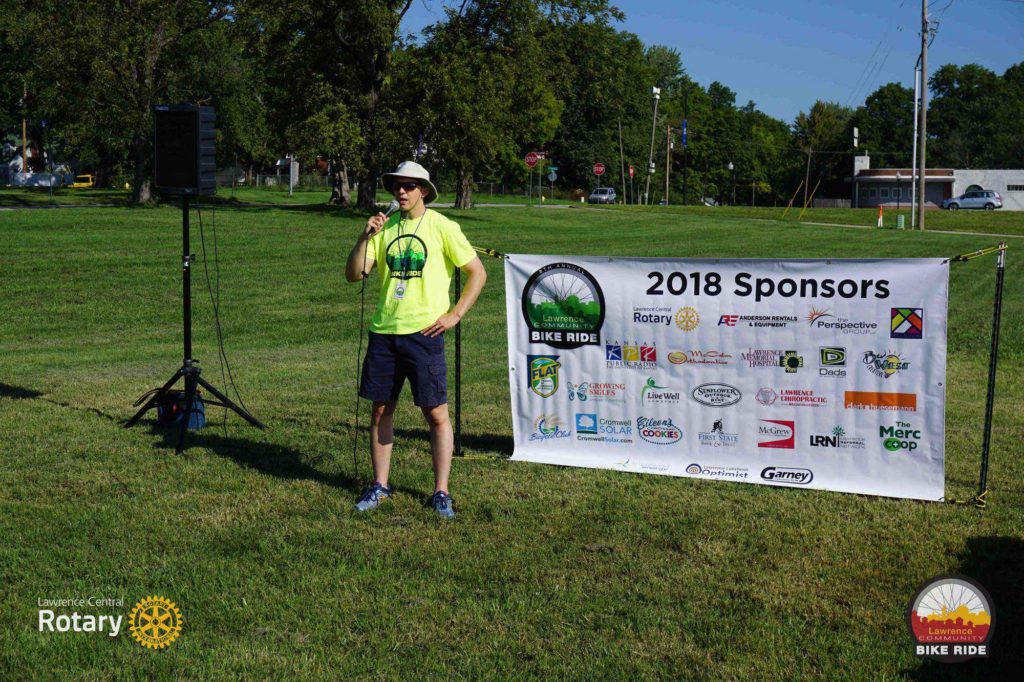 On behalf of all of us at Lawrence Central Rotary, a big thank you!

On Saturday we hosted the 2nd ride of our “Community Bike Ride” initiative. In spite of warm weather, overlap with the KU football game, and a variety of other options, we were able to total 79 participants (by counting the waivers). We had another successful helmet giveaway – as well as providing neon safety vests and shirts.

For the year (both rides), we had 247 participants, we gave away 107 helmets, 98 vests, and 105 shirts (with shirt and vest totals only limited by our inventory). And, importantly, we had another successful year without injuries. We heard multiple people share that it was “…my first time on this trail!” and more than one family share that they were back with kids who had graduated from our training-wheel takeoff clinic (that Jane Huesemann leads).

Speaking for the group – each time we help fit a child (or adult) with a helmet – provide them with a bright (neon) vest or bright shirt – we know we are proactively promoting well being (safety). It means a lot to us – and we could not pull this off without your help.

Below is a gallery of pictures (thank you Lynn O’Neal, Tobin Neis, and the folks at Friends of Lawrence Area Trails). Our fall ride that started at the Haskell Stadium parking lot and went up along the Burroughs Creek trail and back.

We are looking forward to coming back in 2019 and we hope you choose to be along for the ride!

Pictures from a community bicycle ride organized by the Lawrence Central Rotary Club. Starting at the Haskell Memorial Stadium and riding up and back on the Burroughs Creek Trail

We’ve reserved the space, got the sponsors, now we need you to come out and enjoy our second 2018 Lawrence Community Bike Ride.

Here’s what we’ve got on tap for this year’s event from 10:00-12:00 at the Haskell Indian Nations Stadium parking lot:

The ride will be on Lawrence’s Burroughs Creek Trail which is a great, smooth concrete multi-use path that is wonderful for beginners as well as seasoned riders to have a safe place to ride and enjoy Lawrence’s Eastside.

Thanks to all our sponsors these annual events just get better and better.

All riders must fill out a release you can download one from this LINK.

(We’ll have them on hand too.)

Get this on your calendar! We look forward to seeing you!

Lawrence Is a 4-Star Community 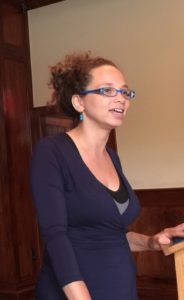 Jasmin Moore, Sustainability Director for Douglas County, reminded Rotarians that Lawrence became a national leader in 2016 in quality of life measures, the first community in Kansas to earn a 4-STAR certification.  The STAR measurement framework (“Sustainable Tools for Assessment and Rating”) allows communities to track progress toward improved quality of life against seven sets of objectives–and to compare themselves with others working on similar goals.

Moore defines a sustainable community as one that is economically, environmentally, and socially healthy and resilent.  She uses a four-way test to evaluate sustainability initiatives:

Originally from the Kansas City area, Moore chose to study urban planning at KU when she became intrigued with the idea that the built environment of a community influences the health of the community.   After a series of jobs in Colorado, Texas, Arkansas, and Johnson County, she has landed back in Lawrence.  Now she coordinates the City/County collaboration to develop integrated solutions and long-term investments for sustainability.

The City of Lawrence Parks and Recreation Department’s Lawrence Rotary Arboretum that is maintained by local Rotarians and the Lawrence Parks and District Department has been awarded a Level I Accreditation by the ArbNet Arboretum Accreditation Program and the Morton Arboretum, for achieving particular standards of professional practices deemed important for arboreta and botanic gardens.

The ArbNet accreditation program is the only global initiative to officially recognize arboreta at various levels of development, capacity, and professionalism. The Lawrence Rotary Arboretum is now recognized as an accredited arboretum in the Morton Register of Arboreta, a database of the world’s arboreta and gardens dedicated to woody plants. 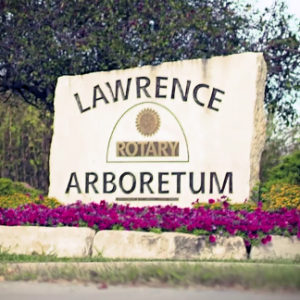 The Lawrence Rotary Arboretum was conceived in 2003 and dedicated in 2005 as a project by the three local Rotary Clubs in Lawrence, the Lawrence Rotary Club, the Jayhawk Breakfast Rotary Club and the Central Rotary Club as a fundraising activity to commemorate the centennial of Rotary International. Funds raised went toward the waterfront gazebo.  The arboretum began development with the addition of new trees having identification markers which detailed the scientific name of the tree.  Gardens were also added, including a certified Monarch Watch waystation, providing habitat for butterflies.

Additional projects such as a performance stage, bike path rest station, and Westar Pergola were completed by local scout troops and other volunteer groups.

Recently, an inventory of trees was developed through the department’s use of TreeWorks mapping software and using GIS to develop an interactive storyboard.  The storyboard creates a self-guided tour of the arboretum, detailing trees planted within the arboretum with photos and common and scientific names of each species of trees via the internet. It can also be helpful to those visiting the park and can pull up the site on a mobile device. To visit the ESRI storyboard of the Lawrence Rotary Arboretum, please visit: http://lawks.us/2xCmOih.

ArbNet is an interactive, collaborative, international community of arboreta. ArbNet facilitates the sharing of knowledge, experience, and other resources to help arboreta meet their instructional goals and works to raise professional standards through the ArbNet Arboretum Accreditation Program. The accreditation program is sponsored and coordinated by the Morton Arboretum, in cooperation with the American Public Gardens Association. and the Botanic Gardens Conservation International. The program offers four levels of accreditation, recognizing arboreta of various degrees of development, capacity, and professionalism. Standards include planning, governance, public access, programming and tree science, planting and conservation. You can find more information about ArbNet at www.arbnet.org.