One of Lawrence Central’s ShelterBoxes Deployed 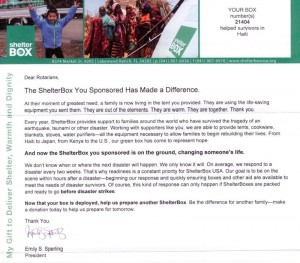 Lawrence Central along with the help from the Lawrence Monday Noon Rotary and District 5710 grants were able to purchase 3 ShelterBoxes last year.

Shelterbox is a Rotary-based organization that responds instantly following natural and other disasters by delivering boxes of aid to those who need it most. Each ShelterBox supplies an extended family with a tent and essential equipment to use while they are displaced or homeless. ShelterBox is now firmly established at the forefront of disaster relief and our work constantly earns the respect of outside agencies.

We recently received news that one of the boxes we raised funding for was deployed to Haiti for Hurricane relief late last year.

We’ll be tracking the others and posting updates on where they went. 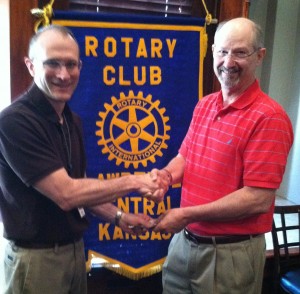 Dr. Lynn O’Neal presents Club Treasurer with the last of funds to donate our first Shelterbox.

In July of 2011, the Lawrence Central Rotary Club elected to begin a fund drive to raise $1000 to purchase a Shelter Box from ShelterBox USA. George Brenner and Lynn O’Neal, MD were the first contributors to the fund.

Over the course of the the year, at each weekly club meeting, a raffle was held to raise funds for the Shelter Box drive.

The winner of each raffle was allowed to donate her or his winnings to the fund. Thanks to the winners who donated their profits back to the club, we were able to raise approximately $80 per month.

Lawrence Central Rotary looks forward to monitoring the location and use of our shelter box and we hope our small contribution will help a family to survive during a time of crisis.

If you are unaware, ShelterBox is an international aid organization that provides emergency shelter and life-saving equipment following disasters such as earthquake, volcano, flood, hurricane, cyclone, tsunami or conflict.

More than a decade ago, ShelterBox founder, Tom Henderson asked himself what his family would need to survive if they lost their home. His question became a quest to provide a compact, universal tool kit to families displaced by disasters. ShelterBox would afford dignity, self-sufficiency and most importantly, human survival in the chaotic weeks following an earthquake, tsunami, landslide, flood or other disaster.

The top priority of many aid organizations is to provide food, water and medical care to help people survive the immediate aftermath of a disaster. Without protection from the elements, survivors are at a higher risk as they await nourishment or medical attention. We recognized that little or no assistance was given in terms of proper shelter to help them through the first few days, weeks and months as they tried to rebuild their lives. In response, ShelterBox developed a solution to help disaster survivors during the critical period following a disaster but preceding reconstruction.
Each box supplies an extended family with a tent and life-saving equipment to use while they are displaced or homeless.   The contents are tailored depending on the nature and location of the disaster, with great care taken sourcing every item to ensure it is robust enough to be of lasting value.

The donation amount to sponsor each box is $1,000, which includes delivery direct to those who need it. Each box bears its own unique number so as a donor, you can track your box all the way to its recipient country via the web site.

Since its inception in 2000, ShelterBox has firmly established itself at the forefront of international disaster relief, providing emergency shelter for people who need it most following more than 180 disasters in over 80 countries.

They rely on public donations and could not operate without the generosity of people the world over. Shelterbox’s supporters constantly go the extra mile to help make a difference to the lives of families who survive disasters.

Lawrence Central has been working to raise $1000 to endow a ShelterBox, currently we're 3/4 the way there!  There's been some new great developments we'd like to share.

There was an interesting story on the national Rotary site.

Top: Tom Henderson, CEO of ShelterBox, and John Hewko, RI general secretary, during the signing of a project partner agreement this month. Bottom: ShelterBox teams distributed more than 550 tents to Madagascar for families left homeless by a powerful cyclone. Photo by Angela Spencer-Smith/ShelterBox

“Project partner” is a special status RI gives to groups started or managed by Rotary clubs. The agreement will build on the strengths of both organizations in responding to disasters all over the world.

“Our Rotary friends have always been there ready to assist – from generous donations to direct operational support on the ground Rotary has always been part of our DNA,” said Tom Henderson, ShelterBox CEO. “I feel like we have 34,000 ShelterBox offices around the world working together to help those who have lost everything when they need us the most.”

RI General Secretary John Hewko said the agreement will enable Rotary club members to have an immediate, lifesaving impact in communities hit by natural disasters. “ShelterBox will be able to ensure that local Rotarians are provided an opportunity to participate in the distribution of ShelterBox containers,” he said.

Each ShelterBox typically provides a bespoke tent designed to withstand extreme weather conditions, stove, water purification kit, blankets, tools, and other necessities to help a family survive for six months or more after a disaster.

Henderson, a civil engineer and former search-and-rescue diver for the British Royal Naval, founded ShelterBox in 2000. Its response teams of trained volunteers have brought lifesaving supplies to victims of more than 175 disasters in nearly 80 countries.

“For more than 10 years, ShelterBox has given light to over one hundred thousand families worldwide in their darkest hour,” said Hewko. “This project partner agreement represents our mutual goal of helping those in need. It gives RI a forward-facing approach to immediate disaster relief.”

Noted Henderson: “This partnership with Rotary International is a formal recognition of our good work over the past 12 years. It will help Rotarians get a better understanding of what we do. I hope Rotarians worldwide will see us as a coherent and able disaster relief organization.”

Earlier this month, a ShelterBox team distributed more than 550 tents to communities in Madagascar where powerful cyclones left more than 250,000 people homeless.