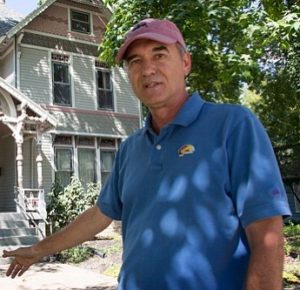 The City of Lawrence was one of the first communities in the nation to establish a Fair Housing Ordinance, said local historian Tom Arnold. This important event took place in Lawrence in July 1967, well before the federal Fair Housing Act was enacted in 1968.

Tom Arnold has spent the past months doing research and developing an oral history to commemorate the passage of Lawrence’s Fair Housing Ordinance fifty years ago. After thirty years in the U.S. Navy, Tom came to Lawrence to teach Naval Science at KU for three years as an adjunct professor. He retired from the University six years ago and began volunteering at the Watkins Museum. As the anniversary of the Fair Housing Ordinance approached, Arnold took the archival work that began in the City Attorney’s office by LCR member Scott Wagner, Management Analyst, and accepted the task of developing an oral history to complement the historical documents. Those interviews were conducted in October and November 2016. The goal was to get the personal perspectives and motives of individuals who participated in this important set of decisions in Lawrence during the 1960s.  Arnold conducted nine interviews with eleven people, generating twelve hours of recordings.  The recordings have now been transcribed so that they are searchable for future research needs.

The milestone anniversary of the Fair Housing Ordinance will be celebrated with a variety of events and displays during the coming months. There will be a visual display at the Watkins Museum and a traveling exhibit as well. Documents will be archived at the KU Spencer Museum.

The Lawrence Human Rights Commission (HRC) was established in 1961. Before that time, none of the public swimming pools were open to non-whites. Businesses routinely segregated Afro-Americans and even refused services.  The Fair Housing initiative began as a grassroots movement among Lawrence citizens in 1964 when the Lawrence Fair Housing Committee formed. Attempts to pass state legislation on Fair Housing failed, so the group transferred their focus to the local level. The Lawrence Ordinance was the result of effort and risk-taking by many to address the housing discrimination and inequities that existed in the Lawrence community. The Committee sent a resolution to the Human Relations Commission of the City of Lawrence in 1967. By that time, there was broad support. Many community groups and churches collaborated to bring this significant milestone to reality.