Haitian and US History Entwined 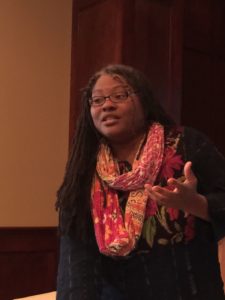 Cecile Accilien, Ph.D., is Associate Professor and Director of the Institute of Haitian Studies in the Department of African and African-American Studies at KU.  Although born in Haiti, she has lived in states all across the United States.  She urged Rotarians and political leaders to reject negative stereotypes about Haiti, learn about the country’s distinguished history and connection to the United States, and understand how that history has resulted in Haiti’s situation in the world today.

Several hundred Haitians fought on the side of American revolutionaries in 1779 at the Battle of Savannah, Georgia. A statue was erected in 2010 in downtown Savannah commemorating the event.

Haiti is the world’s first black republic.  Its slave revolution won independence from France in 1804, making it the second independent nation in the Western Hemisphere after the United States. The United States waited nearly 50 years to recognize Haiti’s independence, fearing a contagion that would inspire American slaves to rise up to an even greater degree.

President Thomas Jefferson was able to buy the Louisiana Purchase from France in 1803 because Napoleon had lost control of Haiti (then known as Saint-Domingue) due to the courageous fight of the Haitian people.  The “gingerbread architecture” of homes in Louisiana, language, food, and religion all had roots in Haiti.

For 19 years (1915-1934), the United States occupied Haiti, completely controlled the country, and rewrote its constitution to benefit American economic interests. Haiti was a powerhouse supplier of sugar, rum, and indigo to its northern neighbor.

In Fall 2018, an art exhibition at the Spencer Museum of Art at KU will highlight “The Ties that Bind:  Haiti, the United States, and the Art of Ulrick Jean-Pierre in Comparative Perspective.”  The exhibition notes explain that “both the United States and Haiti were impacted by complex encounters among European colonizers, Indigenous populations, and enslaved peoples. These nations share common revolutions for independence and violent but ultimately successful attempts to abolish slavery. The ongoing migration of citizens between Haiti and the United States has led to hybrid forms of architecture, language, food, and religion.”