Kressig and LaClair Welcomed into LCR 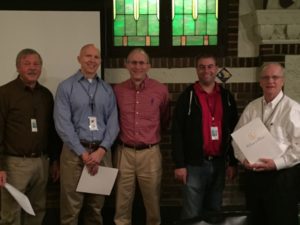 Standing left to right in the photograph:  Atchison, Lane, Kressig, LaClair, and Evers

Ramsdell and Meyer Inducted into LCR 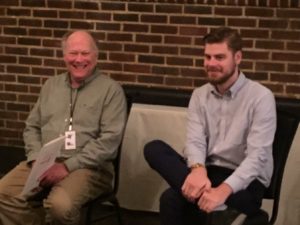 Bob Ramsdell (left) and Kade Meyer (right) were inducted into Lawrence Central Rotary on Wednesday, November 15.  After the brief ceremony, President Fred Atchison asked both men to tell the group more about themselves.

Bob Ramsdell said that before earning a law degree at KU, he spent 21 years as an artillery officer in the Army.  He then worked eighteen years in a local law partnership.  In July 2017, Bob set up a solo law practice in Lawrence focusing on estate planning, probate, trusts, wills, and elder law.  He and his wife are originally from Maryland; they have two adult children who live in the area.  Bob was drawn to Rotary because he has many friends who have been involved in the organization.  He selected Lawrence Central Rotary Club because it is small enough for friendships and big enough to get things done.  In his free time Bob likes to read history and biography and enjoys photography.

After a six-year stint in the Army Reserves, Kade Meyer returned to Topeka where he and his two siblings had grown up.  He followed his father’s lead into the insurance industry and currently works as an insurance account representative in Lawrence, specializing in life insurance.  As Kade launches himself professionally, he knows he needs to connect to the community.  Joining a Rotary club has been an ideal way to do so, but he has also gotten involved with a number of other groups and initiatives in both Lawrence and Topeka.  Kade chuckles as he acknowledges he chose Lawrence Central Rotary because of our reputation as “the fun group.”  In his free time, Kade enjoys listening to podcasts and to a variety of other media. 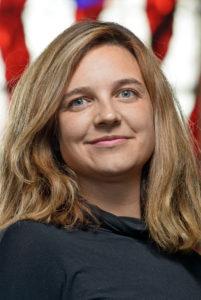 Inspired to Action at 2017 RI Convention and Peace Conference

No one can do it alone.

This theme inspired 40,000 Rotarians to action at the Rotary International Convention and the Presidential Peace Conference in Atlanta, GA, in June.  Lawrence Central Rotarians Janis Bunker and Kate Campbell described their experiences at the event.

In addition to the keynote presentations, numerous breakout sessions provided project ideas and resources to all who attended. 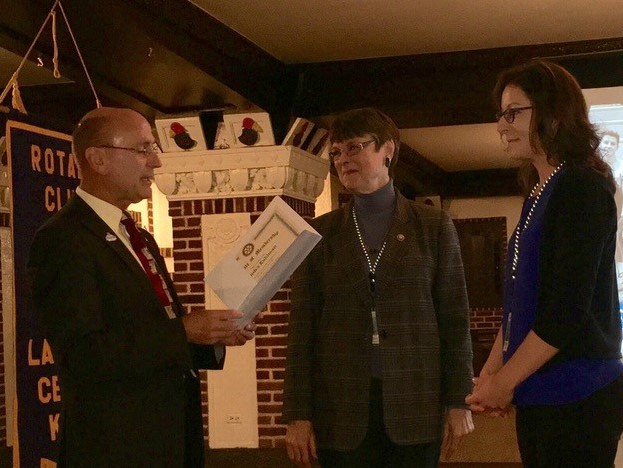